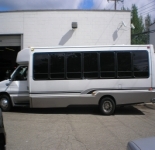 Rob Smith is currently living in Macomb, Michigan, working as a Custom Limo/Coach building in "Customize It " and is interested in Automotive, Electronics, Services.
Not the person you're looking for?
Find more results for Rob Smith

Rob Smith has not shared any updates

Other Custom Limo/Coach buildings from Michigan

Rob Smith works at Customize It